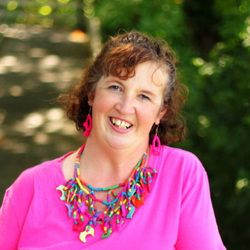 Jennifer Hutsell
The story and gift of life that God has blessed me with begins with memories of abuse and neglect. But God didn’t leave me there. In fact, He met me there and began using the circumstances of my life to shape me into the woman He created me to be and to serve the purpose He had ordained for me.

At the tender age of three, I remember experiencing a deep sense of confusion, hurt, and fear as my uncle, holding me, danced me around the dining area of our home, laughing and making light of the situation that was taking place in the room next door: my bedroom. My parents were both in there talking to my cousin, a boy eleven years older than I, as a result of some form of disclosure that inappropriate sexual touching/activity had taken place between him and I. While I thankfully don’t remember the specific details as to what transpired in secrecy within the walls of my room, I do remember with vivid clarity the feelings associated with being “comforted” by my intoxicated uncle in the aftermath.

That was the first experience of sexual abuse from my cousin that I recall. Other encounters of inappropriate activity with him took place over the next five years. I also have many memories of neglect and emotional and physical abuse by my mother. I experienced much fear, terror, sadness, confusion, and isolation during those years.

During my first year of school, by God’s divine appointment, I had the opportunity to attend a Good News Club group, a program that spreads the good news of Jesus to children after school. Through that program and the volunteers that gave of themselves to share Jesus with me, I accepted Jesus into my heart and life. From that point on, I remember experiencing the comfort of His presence while singing songs and praying when I was alone or scared.

My parents divorced when I was eight years old. I was thrilled and excited that I would be living with my dad, but at the same time, I was worried about their decision for my younger brother to remain with our mother. Since his birth, I had taken care of us both in absence of our mother’s ability to provide loving nurturance. God provided an amazing and loving Christian woman as my step-mother shortly after the divorce. Through her guidance, love, and nurturing, my life took on an entirely new outlook. I now had the opportunity to become a contributing member of society, a lady, a wife, and a mother.

Through the direction and resources provided me during the next season of life, I experienced some healing through counseling and gained more knowledge of who God was through participation in Sunday School and youth groups. However, I still felt very much alone, confused, and frightened. My identity was based on my performance in school, and my focus was on not causing anyone to become upset or disappointed with me. During those years, my birth mother was also absent due to her refusal to seek help after sexually molesting my brother following the divorce. Her absence contributed toward the state of confusion I experienced with regard to who I was and my worth and purpose in life.

At the age of seventeen, I reunited with my birth mother, lost my virginity to a young man I met through her, and became engaged to him. The day after I turned eighteen, I married this man despite many convicting feelings that he was not the right one for me. My extreme fear of being alone in the world and possibly accosted or attacked led me into a marriage with a man that I had little in common with and feelings of distrust toward. Within the first year of marriage, we had both committed adultery, and he was engaging in pornography and drug use. In year two, we got pregnant; year three, my mom died; year four, we separated; year five, we divorced. 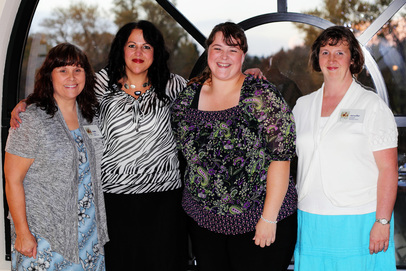 Jennifer with some women from her church
I went from that marriage directly into relationship with and eventually married the man with whom I had committed adultery. I was terrified of being alone, and even more so, certain that I could never raise my daughter on my own. Instead, I chose to marry a man I had doubts about being the right one for me. Before long, I found myself and my daughter living in an unhealthy and increasingly abusive home. By the time my daughter was fourteen, I was actively using methamphetamine with my husband, and I had sent her to live with a family member. The drugs and my extreme codependent and abusive relationship with my husband became my focus, at her expense.

Three years ago, on the night of my husband’s death, the Lord showed Himself to me in a life-altering way. The level of peace and freedom I felt that night was nothing less than supernatural. I remember thinking that I should be feeling panicked or frightened, worried or anxious, anything but the overwhelming sense of peace and relief I was feeling. I knew then that the Lord was providing me an opportunity to heal, completely, from the effects of the abuse I had experienced throughout my life. I recommitted my life to Him. It took another year for me to give up the few shallow drug related relationships I had in my life and the drugs, but when I did so, He stepped in, again, in a mighty way.

Over the last two years, through Christ-centered recovery efforts, God has healed relationships within my family, provided many new close relationships with loving church family members, and has done a healing and redemptive work within me. A year ago, I came to Mid-Valley Fellowship, seeking one-on-one support and healing from the effects of abuse in my life. I was determined not to marry again into an unhealthy, abusive relationship. I just knew that God had some deep healing and divine purpose for me. I was determined to seek out His will for my life. I was unable to afford the hourly fee for the counseling sessions, but thanks to ministry donors, I was required to pay only a fraction of the usual fee for each session. God had plans for me. The first time I came to meet with Angela, I was scared, not sure that I wanted to open up all those old wounds from my life. As I continued to meet with her, I began to feel hope. God was revealing new things to me! 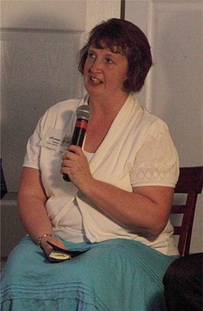 Sharing her testimony
The counseling and support provided by Angela has contributed greatly to the new-found freedom from the bonds of dysfunctional, codependent thinking and behavior that I have been trapped in all of my life. The Lord showed me through the work I accomplished under the caring support of this gifted and willing mentor that He did not design me to live a life full of pain and brokenness. He has created me to be (I am…) beautiful, kind, loving, giving, caring, compassionate, and genuine. He reminded me that He had plans to complete the work He had begun in me: nothing less than full redemption. Today, my life as an intern with Mid-Valley Fellowship is one that provides me a sense of joy, gratitude, and fulfillment. God is using me to shine His light and truth into the lives of women who have experienced similar traumas and circumstances. He is using me to inspire, encourage, and support women as they too work toward the plans He has for them. Today, my identity and most intimate relationship is found in Him!

Recently, I’ve been reading through the book of Revelation. It is difficult for me to read about how bad things will get (and are) with sexual immorality. However, because of the redemptive work He has done in my life and through the efforts of Mid-Valley Fellowship, I have hope. I look forward to the marriage banquet with my Bridegroom! No matter your past, you too have an opportunity to rejoice with me and others at the marriage supper of the Lamb! God has redeemed our sins through the blood of Christ on the cross, but it is our call, our right, indeed, our pleasure to respond by allowing Him to continue His redemptive work in us in unique and personal ways.
December 2013
More Stories